The sub run. No,not to subway, but the running of a distance below a certain time frame. Most people when they start running eventually getting point where they want to aim for a sub 30 5k or a sub 60 10k. While I know I can do the former, it is the latter I have been more interested in. Five km for me is a warm up,a run to do so I feel ‘like I’ve done something when I’m feeling lazy’ kind of thing. After only 12 short months I am definitely in the minimum of 10km distances. The best man can do five km a good five minutes quicker than me and still have room for a sprint at the end. Me, I’ve always been good at holding the pace for distance. Over the last six months I have run several 10km races and my goal was to get that elusive sub 60 mins. I have been so close several times, and have done it once or twice over a longer distance, but for me it has to be official. I feel that once I’ve done it, and it’s in writing so to speak, then I can move on to the next thing. This is not saying I will never be happy and there is always something else round the corner, it is about stretching myself, adjusting the dream, while still being proud of where I have come from and what I have achieved. Even right now, as I type this, I am pretty happy with my results to this point.

Part of my marathon training called for a 10km slow run on Sunday just gone. Well, it just so happened that it coincided with a local fun run….yep, you guessed it, a ten kay-er. It didn’t take much to say “bugger the plan, I’m going for the sub 60”. And speed is good to practice also. While I am not speedy by some standards, it was fast for me.
My plan after I arrived was to identify the 60 min runner and stick with him the whole way til the last kilometre and then pop ahead to finish under the hour.
We all know how “the best laid plans…” work out. Well mine did. I went out strong and got ahead of the pacer. Actually I went out too quick and got ahead of the pacer. For most of the race I was pretty well in the middle of the 55 and 60 min pacers, I considered this good, I could place quite well.
The last couple of k’s were hard, the result of going too hard too fast too soon, and I slowed down probably more than I wanted too. Either way, I still finished strong, as I like to, and was about a minute ahead of the pacer.
Then, typically, I forgot to turn off my tracking so it clocked my run at 1.01 with a very slow last 300m.

I was still pretty sure at this point that I had done it, but when I saw the preliminary results I was super happy. I may have had less than 60 seconds to spare but a sub 60 is a sub 60 no matter whether there is 1 second left on the clock or otherwise. And I am really proud of myself. Now, I don’t mind what I do. So long as my longer distances are consistent then I am happy. I can cross one more thing of my list.
My stats for the race are:
Place: 164/196
Gender place: 60/84
Time: 59.14! 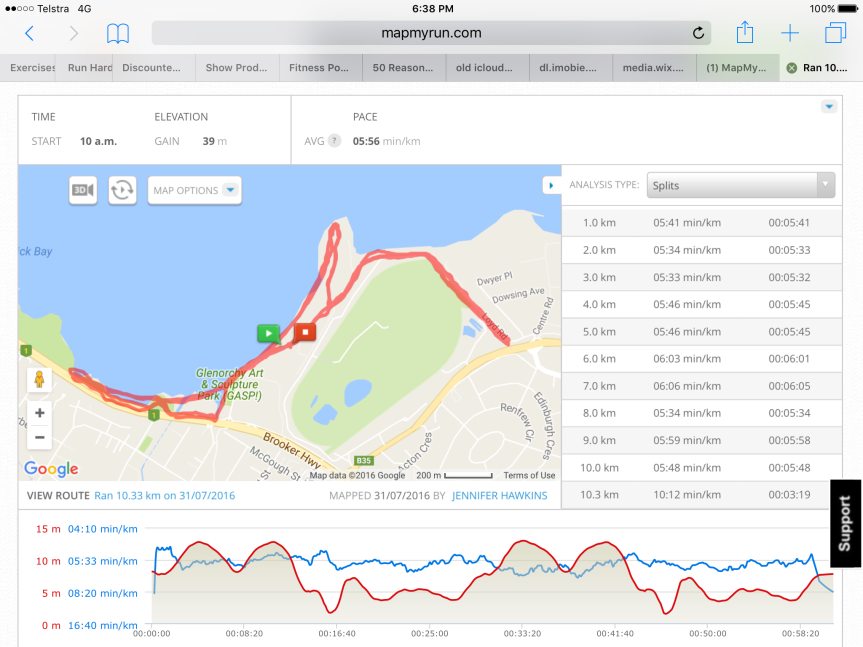 And in other news I am now officially registered for the Point to Pinnacle in November. 21km of pure hill climb through some of the best scenery we have to offer. And spaces are limited to 3000. Scary stuff.