This is where it started 12 months ago. Twelve months ago when I was barely running and definitely not in any kind of competitive manner.  I saw the ads in the paper and said “next year I’m going to run that”.  If only I’d known then what I know now. That by the time I ran the City to Casino I would already have a half marathon, two 10km and the Mother’s Day Classic under my belt. And learnt a hell of a lot about myself over that time.  My strength with training and lasting the distances required. Sometimes with ease. Sometimes with aches and pains. And sometimes with disappointment.  Due of course to my own expectations.
My only goal at that time was getting the medal. Which meant finishing under the 2 hour mark. I figured I could that with some ease. What I didn’t realise was that I would be able to blitz even my best time to date in the process. And boy what a feeling it was.

The weeks leading up to race have been pretty wet and yucky. Especially on Sunday race days. Ah well. The craziest of the crazy still come out to run. Because it’s just water after all.  My training was constant and I made it work by doing lots of short but fairly intense treadmill runs
I was well organised as usual.  I’m that kind of person. I need to know I have everything ready. The location, parking, other transport if required, bag drops…everything.  I leave next to nothing to chance. And I’m always early. This does nothing for the nerves, but I deal with it. I get in a panic of I think I may be late.

So, at 7am I arrive at the finish line to park and wait for the bus.  Light stretches and taking the obligatory toilet stop I then wander around the empty car park before heading off to the buses. I chat with a lady doing the shorter run as we head off and wish each good luck at her stop.
Arriving at the start line there is another loo stop (I’ve found I’m not the only one who has to have 3 or 4 of these prior to a race) before running into a lady I met at the last two races I did.  Chatting with someone helps to ease the nerves, and ten minutes to start we are  escorted by police across the highway through the road works to wait.
And then it starts to rain.  Big fat drops to start with. Ugh. It was cold and my toes were starting to go to sleep.
Nine am the gun goes off and by the time I crossed the start line it was full on raining and I was drenched. No point complaining, it was actually quite nice, with the temperature being low enough to make running comfortable.
I turned my phone right down so I could barely hear my running app, just enough to keep an ear on the time. By the time I reached the 3.5 km mark I felt good and had properly settled into a rhythm.  There were plenty of people always around and while I wasn’t listening to anything I wasn’t talking to anyone either.  I am a solo runner for the most part.
We had passed the two main inclines, one short and sharp the other longer and on both I ran a steady if slower pace and kept moving.  I have found that walking can make it harder to start again, so I make sure I keep moving and then it’s easier to pick up the pace on the flat or downhill.
My mistake I felt here, was doing what I do in my training runs and not push my downhills. That would have saved a good minute or two by going faster on the downhill.  Lesson learnt.
As we entered the short underpass to cross the highway the portable dj was there and it brought a big grin to my face. The instant pick me up was just what I needed. Then another sharp incline and back onto the highway.
It was as we ran past the waterfront with more spectators that I felt it. That feeling of insane joy, of accomplishment, of the thrill of running through the streets. Past people in cars, waving and smiling at the pedestrians.  It’s an odd feeling and I’m not sure I wrote exactly how it feels, but I want to do it again.  Being completely honest here it’s not about the looks, I’m an awkward and not the most elegant runner, I just love it all.  The atmosphere, the participation, the competition and the getting out there and doing.  There is something about running the streets, I simply love it.  Even if my photos don’t make it look so. That’s my competitive side coming out in me.

Then I am on the last stretch, the last 2-3 kilometres where we are running directly next to the cars.  I’m concentrating on getting past the walkers and avoiding the witches hats leaving me to completely miss the water station. Dammit, I was ready for another splash of water.  At the time I saw it, I was too close to the end and was certainly not going to turn round.  I pass a few more groups and hear mutters about how the runners have made rubbish and thrown their cups on the road.  I would have done the same 6 months ago. Not so any more.

About one kilometre out I chose to whip a little butt and move it up.   The last small incline was easy, then a light downhill and rounding the corner to the finish line. As I came round the corner the people fell away as I sprinted down the chute and across the finish line.  I caught a glimpse of the time and had that ‘Omg!’ moment. I had done it. Equalled my own 10k time for a full 11.4 km. Which meant I had done another sub 60 10K. I was so incredibly happy, tired, but happy.  And a week later, I still am. There’s something about getting a pb or finishing a race still strong that makes all the work worthwhile. Even the knowing I could have made it closer to the 60 mins doesn’t phase me*

Crossing the finish line was one thing, navigating the crowds to get my water and fruit was another.  Especially as the skies opened up at that moment and I drenched once again.

The grin on my lasted all afternoon and the energy I had was incredible. I was full of it. It was racing through me, giving me that runners high, only this time it lasted so long and I let it roll over me.
The race that started it all. The big one. That surreal feeling of having wanted something for so long and then finally having it in your hands.  Bring it on next year. You never know, I may blitz my time and get a sub 60 for the full 11km. 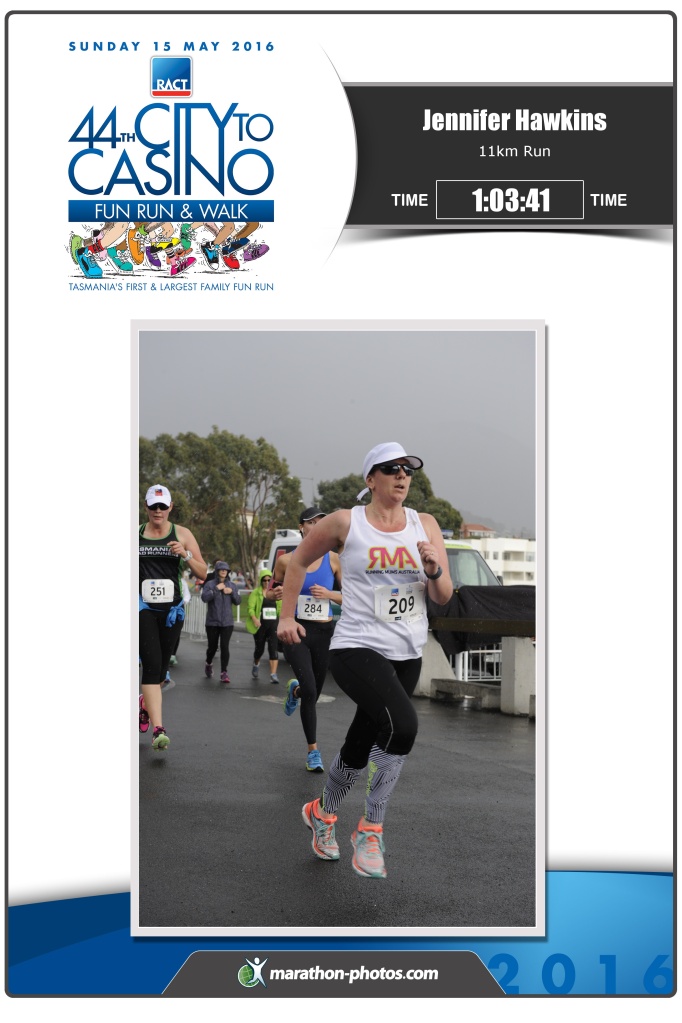